We took Anna to the beach today for the first time. We went to Sanibel Island on a perfect day. We saw dolphins, a parasailer, dogs swimming, and this lovely little sailboat. Anna loved the beach and we all had a wonderful time! 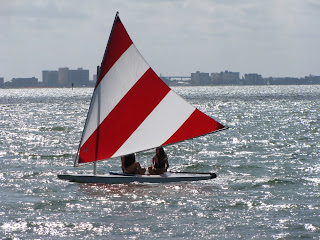 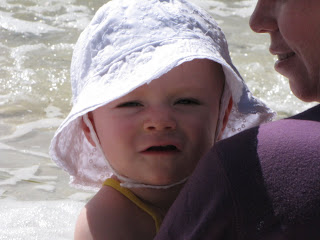 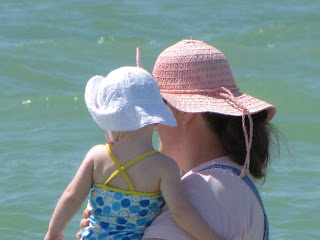 A Fond Farewell From a Floridian 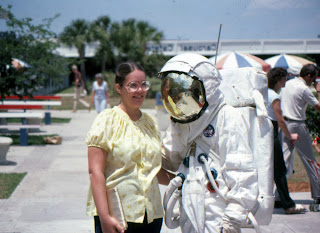 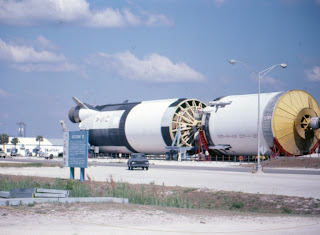 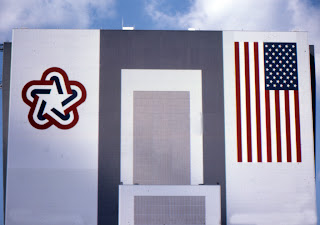 It was with a fond smile of nostalgia that in the early morning hours of July 21st, 2011, I heard the double sonic boom of a returning space shuttle for the last time. After all, the space program has formed a backdrop to my entire life. When I was born, fifty years ago, the space program was just getting off the ground.

Eight years later I experienced the excitement of the United States landing on the moon vicariously through Neil Armstrong and Buzz Aldrin. I never looked at the moon the same way again after that. Instead of seeing an unreachable mystery, I gazed up and pictured men walking on its surface; I wondered if someday, I would be up there too. A couple of years later I went with my family to Cape Canaveral, Florida to visit the Kennedy Space Center. We marveled at the enormous scale of all the equipment and machinery, and craned our necks to see all the way up inside a building so huge that if anyone dared to open a window, clouds would form inside.

I visited again as a young wife, expecting my first child. This was in 1981, just as the Space Shuttle program was being launched. We sampled vacuum-packed, dry ice cream, Neopolitan-flavored, to be exact. We strolled the Rocket Garden, and I posed with a roving astronaut, in full regalia. We toured the facility, saw rocks brought from the moon, and dreamed of some day bringing our children to see a launch.

A few years later, I stood outside on a beautiful winter day with my two young sons, excitedly anticipating the send-off of Christa McAuliffe, the first teacher in space. We watched as the silver-tipped plume rose steadily in to the sky. But just before the Challenger “slipped the surly bonds of earth,” suddenly it went shooting everywhere, and the orderly column of smoke became three large plumes falling back to the earth. I thought, oddly, that it looked as if an enormous banana was being peeled by a giant hand, and I knew something was terribly wrong. Later I cried as I saw Mr. McAuliffe’s face on t.v as he stood beside his two young kids. His expression. turned from pride and excitement to confusion, then horror. As hard as it had been for me to explain to my young children, it couldn’t compare to his job with his own motherless children. I mourned along with the country again when the Columbia and its crew were lost.

Over the years, we watched other shuttles rise in to space, and were awakened abruptly, weeks later, by the distinctive sonic boom that shook our house so hard we thought something had crashed in to it. Every time we would be startled and concerned, then laugh as we realized it was just another shuttle announcing its homecoming.

So July 21st was a day of nostalgia. That child I was expecting is now expecting another child of his own, and the Space Shuttle and I are retired. It is the end of an era, for the space shuttle program, and for me.
Posted by Rosezilla (Tracie Walker) at 9:26 AM 5 comments:

Good News All Around

I had a great visit with my new cardiologist today. I am released to exercise! That should help with all sorts of conundrums. Exercise helps regulate mood, blood sugar, weight, circulation - I am looking forward to getting back in shape.

I also found out recently that I am getting a super present this Christmas (or thereabouts). A new grandbaby! Anna will have a sibling soon. Don't babies just make you happy? Me, too.

Speaking of Anna, she and her parents will be here in just over a week. I am so looking forward to seeing them all. Hopefully this rain will let up a bit, so we can take Anna to the beach for the first time in her young life. Although I am certainly not complaining about the rain, which we needed quite desperately. I do feel a little sorry for the cows in the pasture behind our house, although I have to admit they seem to like it. Probably cools them off in this intense summer heat.

Wow, does it ever make the grass (and weeds!) grow - well, the flowers, too, though. But now that I can do things again, I hope to weed around the crepe myrtle plants and help hubby mow the lawn. So what's up with you these days?
Posted by Rosezilla (Tracie Walker) at 11:56 AM 7 comments:

We saw three movies this weekend, with varying degrees of enjoyment.

The first was Transformers: Dark Side of the Moon at the theater, compliments of our son. I can't say the story line was my favorite... but visually it was pretty amazing. My guys liked it a lot more than I did. It's definitely a "guy" movie - but if you're gonna see it, the big screen is the way to go.

The next one, from Netflix, is called "Extreme Days." This is pretty hilarious, actually. It is the story of four lifelong friends going on a road trip/extreme sports trip they've planned their whole lives. If you remember being young and having an hilarious trip with your friends, you'll relate to this movie. It is billed as a Christian movie, but it really wasn't, although some of the music was Christian rap and rock. However, this designation kept it clean(er) than almost any other "road trip" type movie. It is very funny but without coarse language, sex, or extreme gross out stuff. There is a voice-over "Jackie Chan" style spoof fight, goofy antics and mild romance, and some great sports shots as well, such as skateboarding, skiing, etc. If you like funny movies, but felt "Dumb and Dumber" was way too coarse, you'll love this movie.

The last movie, also from Netflix, was my favorite. It's called "Bandslam," and I'd seen bits and pieces of it when I was in the hospital. We all loved it! It's about music, and the actors are musicians who do their own singing and play their instruments, which gives it a lot more realism. The plot is a sweet teenage misfit that knows an insane amount about music. He transfers to a school where "Bandslam" is THE event of the year, and when a popular girl realizes how much he knows about music, she talks him into managing her fledgling band so they can enter the contest. Vanessa Hudgens of "High School Musical" fame plays against type as an endearingly strange and unpopular girl. The movie is so sweet, funny and clever, yet doesn't fall in to the usual traps in teen based movies. There is no sex, coarse language or gross out stuff of any kind. The relationship between the kids and their parents is mostly good, with a lot of respect as well as love. Nothing about this movie is predictable and everything about it holds true to the theme right up to the closing credits. I highly recommend this movie, and you can even watch it with your kids without blushing! Amazing!
Posted by Rosezilla (Tracie Walker) at 12:31 PM 4 comments:

I want to say Happy First Birthday to our precious little granddaughter, Anna! I am a little stunned at just how much I love this little girl. She is a gift straight from the Arms of God. Being a Grandmother is everything everyone said it was and more. What pure delight! I just spent time Skyping with her and her mother, and she is learning and changing and growing more beautiful every day. 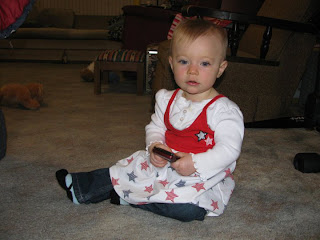 Hello, my old friends! I have decided to begin blogging again - I've missed you all too much to stay away! I don't know if anyone is keeping up with me at Associated Content; I enjoy writing there, but it doesn't have the intimacy blogging does. So I'll be trying to catch up with all of you in the coming days. Ok, maybe weeks.

In the roughly nine months I've been away, a lot has happened, as I'm sure it has with you all. I turned 50. I like being 50! I think it is a good, respectable age. The half-way point! Not too young, not too old. And being a new Grandma, it seems fitting that I not be in my 40s anymore. Unfortunately, my body did not like turning 50, and my heart rebelled. I started the new year out by getting fit and in shape, but right in the middle of Turbo Jam I began having severe, radiating chest pain - this was back in February - and a 99% blockage in the main artery (the widower-maker!) was discovered, and, as I thought, fixed with a stent. But it turns out stents are more like a patch. Anyway, instead of getting better, I began getting worse, and just last week I ended up back in hospital, getting a stent within my stent - scar tissue had blocked it all back up again. So now we're praying that doesn't happen again, because if it does, I'm facing open heart surgery.

I also got to go spend some time with my son, daughter-in-law and granddaughter this spring. My son was in hospital too, with pneumonia, flu, ruptured eardrum and possible cracked rib, so I went up to help out. It even obligingly snowed one day while I was there! A treat for a Floridian, let me tell you. I am happy that I avoided any tornadoes tho! My little granddaughter is the cutest little thing ever! I enjoyed her so much, and she was in major learning mode while I was there, which was a lot of fun. She's about to celebrate her 1st birthday, and then at the end of this month, they are scheduled to come for a visit, hallelujah!

Ok, that's enough for now, don't you think? I want to find out about all of you! Stop by and leave a comment, will you please?
Posted by Rosezilla (Tracie Walker) at 7:08 PM 8 comments: