Leslie and the Aliens

(Lots to say, no time to say it! For now, I thought maybe you'd enjoy a true story I wrote a couple of years ago.) 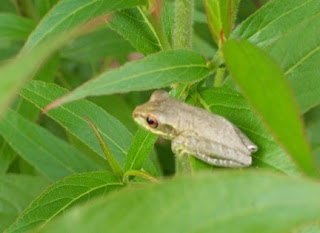 And which of you by being anxious can add a single cubit to his life's span?

And why are you anxious about clothing? Observe how the lilies of the field grow; they do not toil nor do they spin, yet I say to you that even Solomon in all his glory did not clothe himself like one of these. But if God so arrays the grass of the field, which is alive today and tomorrow is thrown into the furnace, will He not much more do so for you, O men of little faith? Do not be anxious then, saying, 'What shall we eat?' or 'What shall we drink?' or 'With what shall we clothe ourselves?' For all these things the Gentiles eagerly seek; for your heavenly Father knows that you need all these things.

But seek first His kingdom, and His righteousness; and all these things shall be added to you. Therefore do not be anxious for tomorrow; for tomorrow will care for itself. Each day has enough trouble of its own."

I tend to be one of those people who doesn't worry about much. Now, don't get me wrong, I am very concientious and responsible. But I don't WORRY. I don't fret and stress, and I'm not afraid all the time. I figure we might as well LIVE until we die, otherwise we might as well be dead anyway. I do pray a lot, but then I tend to let God decide the outcome, and since I know He knows what He's doing, I don't have to try to "help" determine the outcome "my way."

But I don't want to be stupid either. I make sure the stove is turned off when I'm done cooking, lock the doors before I go to bed, and drive as safely as I can. And lately, now that my sons have moved on and I'm here alone a lot, I try to be a little more aware of things. Gardening is one of those things I have to be a little more careful about.

When I garden (or any thing else, for that matter) I tend to forget to pace myself. I just go full bore until I'm ready to drop. But besides being accident prone, I'm not as young as I was, and I've gotten myself in to some trouble doing that. The most recent and serious was heat stroke. I'd been mowing in the hottest part of a Florida summer day, and I began to feel chest pain. I stopped mowing and went in to drink water and cool off, but I couldn't get cool - instead I got nauseous and dizzy, progressing to violent vomiting. I have some health issues with medications that exacerbate the problem, so I was one sick puppy. I recovered, but it left an impression, not only on me but on my doctor and hubby! So now I have to take precautions - and I do! I watch the heat, wear a hat and sunglasses, stop to rest in the shade and drink water, and keep only one battery for the mower, so when it runs out, I'm done.

When I go out to garden, I've begun taking water, a chair, my cell phone, and lately, my keys. I got a scare from a vagrant one day, and I realized any one could go in to the house while I was out working in the garden and I would never know it until I was locked in there with them. So I try to take the proper precautions.

But you know, it's a fine line between proper precautions and living in fear. Today was a good example. I took all the many things out with me that I could possibly need to stay safe and healthy while weeding my plumbagos. But then I had the problem of what to do with them. In typical impulsive fashion, I didn't think it through. I just stuck the keys and cell phone in my shirt (you know, ladies, the ever present "purse" that resides there!). I gardened happily for quite a while, serene in the knowledge that I'd covered all the bases. Until I was nearing exhaustion and decided to finish up and go in. That's when I realized I didn't have my keys anymore. At some point gravity had played it's little prank, and they were gone! I am not known for staying calm in situations like that, but I did! I (calmly) walked around to all the places I'd been, looking (calmly) for the keys. I didn't find the keys, but I did give some thought to the thick piles of weeds I'd clutched to my bosom and then thrown over the cow pasture fence. But I didn't dwell on that thought. Finally I gave up and called my husband. About that time I suffered my ultimate humiliation as I realized I DID have pockets in these shorts after all! It was the OTHER shorts that didn't have pockets.

My husband called my son, who was closer, and who I couldn't call because I had never put his new number in my cell phone, and he came to rescue me. He not only let me back in my own house, but he even found the missing keys for me. Lying in plain site about 2 feet from where I was sitting in the shade in despair.

So what have I learned from this? That I'm a hopeless and impulsive clutz. But actually I already knew that, so what ELSE did I learn from this? I have no idea. On the one hand, being "safe" didn't work out so well, as it so often does not. (How many people shoot a loved one thinking they are a burglar, or are suffocated in their own air bag, or die in a fire because there were bars on their windows?). On the other hand, I was rather glad I had my cell phone with me. And my water, for that matter. So I basically learned I was right all along (don't you LOVE when that happens?); that I need to take precautions, but not worry too much. Pray, leave it in God's hands, and LIVE until I die. At which time I have a sneaking suspicion that the angels will be laughing so hard from whatever ridiculous way I end up dying that they won't even be able to greet me right away!
Posted by Rosezilla (Tracie Walker) at 2:48 PM 19 comments: