The Gift Has Already Been Given!

Everyone is aware that this year is a little tight financially for many people. It's got people to thinking about Christmas, gift giving and what's really important. I think this is a good thing. Everyone loves gifts, of course; most people love giving nice ones as well. But is this really what makes people love Christmas so much? I don't think so.

There are a lot of things we do at Christmas time. Giving gifts is one thing. Singing carols, baking cookies, making candy, and visiting family are some more.  Also, decorating and shopping and going to parties and feasting together. But these are still not what we love about Christmas. These are things we do to celebrate what we love; tokens we give each other to celebrate what was given to us.

Because the Gift has already been given! Christmas, as Linus tells it so famously in A Charlie Brown Christmas, and as the Bible even more famously proclaims, is the celebration of the birth of Jesus Christ our Lord. "And the angel said to them, 'Do not be afraid; for behold, I bring you good news of a great joy which shall be for all the people; for today in the city of David there has been born for you a Savior, Who is Christ the Lord.' " (Luke 2:10,11).  He already came; He already walked among us, brought us Hope, and then died for our sins and rose again! Everything that gives us so much joy in the celebration of Christmas ever since that Holy Night is because of Him; the general happiness, giving spirits and soft hearts we feel at this time of year especially. Of course, some people will point out that we don't know for sure that Jesus was born on December 25th. It is true that we don't know the day He was born. But we do know that He was born, and this is why we celebrate.

Gifts are an integral part of the celebration of Christmas. God gave us the greatest Gift of all time, One that brought peace on earth and to men's hearts. The Wise Men brought gifts to the Christ Child. And we give gifts to one another in honor of His birth; we give ourselves to Him also.  So for Christians, what is really important? The cost of the gift we give? The amount of people we give gifts to? The gifts we receive? Or the fact that we are remembering the Gift God gave us in the form of His Son, Jesus Christ; the fact that we offer ourselves back to Him Who made us in the first place? "For God so loved the world, that he gave His only begotten Son, that whoever believes in Him should not perish, but have eternal life." (John 3:16).

This year is a great opportunity to remember what it is you are really celebrating at Christmas time. It is easy to get caught up in everything you think you have to do and not even enjoy Christmas anymore. But it doesn't have to be that way. God already gave us everything we need to celebrate. A Baby in a manger. Peace in our hearts. Hope for eternity. The Gift has already been given. What more could we possibly need? 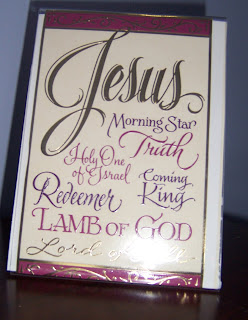 Good things happening! We've been decorating for Christmas. There was even a very obliging cold front that came in the day we put our tree up; it was all grey and overcast, rainy, windy and downright cold! Well, by our standards, anyhow. Probably because it was a change, it was lovely. It shouldn't be too hot to put up the Christmas tree, but many years it is. When you want a Slurpee afterwards, in front of a fan, instead of hot cocoa in front of a fire, you know you live in Florida! We actually got quite a lot of rain this weekend, which was a gift in itself. Great way to begin Brush Fire Season!

My Mother-in-Love and I went on our annual Shopping Trip with Lunch for my birthday. We had a great, girly-girl time and she bought me the loveliest outfit. She got an amazing silver jacket - I was calling it her Jetson's jacket - but she can totally pull it off. The woman's got style! She gave me good guidance, too, on fashion for ladies. I was pondering whether I could wear a certain, perfect outfit or whether I would get too hot, and she said, "Sometimes a lady just has to suck it up and be hot, if she looks good!" I love when the older generation teach the younger... like Aunt Ruth, who told me frequently (when she was in her 80s), "I won't worry! Worry causes wrinkles!" And my own mother, who always looks beautiful, told me once, "Do the best you can, then go eat chocolate." Works for me!

Thanks to all of you, especially Sara, who recommended Elizabeth Goudge. I am nearly done with "Valley of Song" which is simply enchanting! It is not easy to describe - the closest I could come might be to call it a fable - but it is charming and beautifully written, and I hope to go get another of her books at the library tomorrow.

My nieces have been taking ice skating lessons, which all by itself is pretty cool considering we live in southern Florida. They had a recital/show Sunday afternoon (lasted 3 hours!!!); it was a hoot. Like all recitals, there were lots and lots of tiny cherubs in darling costumes who performed all kinds of antics other than the ones they'd rehearsed. The show was perhaps a bit ambitious for the ones who could barely stand upright, actually. But unlike most recitals, there were also some amazing skaters whose names we will probably all be hearing before long. The show was based on movies, such as "Peter Pan," "Grease," "Annie," "The Sound of Music," and others, so (with the exception of "Annie") there was some really good music. And the coup de grace was Todd Eldredge! Not only did he perform, but he is going to be coaching here at our humble skating rink in between his own tours. Pretty cool! Unfortunately, one of my nieces sprained her ankle right at the end. She'll be alright, and she at least waited until she was done with both dance lessons and skating lessons. But I was sorry because I know it hurt.

Speaking of being hurt when it could be much worse, I do have something I am praising God for today. A very close friend of mine (since sixth grade!) has twin daughters; one of them was in a motorcycle accident yesterday. Someone pulled right out in front of her, and she had to lay the bike down. She skidded sideways and went right under a large pickup truck. But it never touched her. She has some painful road rash, some badly bruised bones in her foot, ankle and shin, and a few other cuts and bruises. But other than that, she is fine! Her mother, who has never been in favor of the bike, says God must have wrapped her in bubble wrap. The bike frame is bent, inexplicably. Her mother is even grateful for that, since presumably the bike cannot be ridden now. The other twin just got married - in a beautiful white dress and pink high-top tennis shoes! Tickled me.

Well, I have got to quit gabbing and go earn my keep, clean my house, and finish my library book. Until next time!
Posted by Rosezilla (Tracie Walker) at 1:33 PM 10 comments: 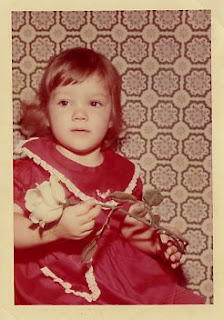 I love this time of year. Everyone seems so much happier and kinder and softer, somehow. And there's more going on than just good old, wonderful Christmas. Yesterday was the last day of Hurricane Season. In my part of the world, that's a big deal. (Of course, today is the first day of Brush Fire Season. Ugh. Always something).

Yesterday was also my 49th birthday. (That's me at one year). One more year to be in my 40s; then I'll get to reset the clock and start over. Since I'm going to live to be 100. I'll only be half way there next year. I love my birthday. I had a very nice one. It started on Saturday when I opened my front door to find 8 poinsettia plants on the porch, from my middle son. They now reside on my dining room table, and they look smashing! Such a cheerful plant. And it's RED!!! Lots of other nice things occurred, I had a lazy, spoiled weekend, and yesterday I enjoyed myself thoroughly. (Thanks for the card, Connie! So sweet!). I had chips and salsa with leftover turkey and a chaser of M&M's while watching an old Hee Haw rerun, for lunch. Then I took a lovely, leisurely bubble bath in my Wonder-Tub. Man, I love that tub. More about it another time. I also cleaned my kitchen and stuff, but I enjoy cleaning my house. Last night we watched "Operation Petticoat," with Tony Curtis and Cary Grant. Still funny after all these years (1959 is when it came out. A year before I did!).

Thanksgiving was wonderful, too. Everything turned out perfectly. And there were lots of leftovers. We all worked hard leading up to Thanksgiving Day. But we were totally lazy for the weekend afterwards. I don't do Black Friday shopping. I'm too tired from cooking and cleaning. And besides, there's nothing I want badly enough to fight the crowds for it. Also, I'm broke. So instead, I slept 'til noon, ate a huge leftover lunch, lounged in my tub, and visited with my hubby.

We watched the new Star Trek movie this weekend. Got it from Netflix. It was kinda cool seeing their version of how the original crew - Cap't. Kirk, Spock, Scotty and all the rest - first got together.  I've also been reading some good books by Deeanne Gist. "A Bride Most Begrudging," and "The Measure of a Lady," which is my favorite. I'm about to read an Elizabeth Goudge book that Sara recommended. I am going to post again soon. Bye for now!
Posted by Rosezilla (Tracie Walker) at 1:40 PM 12 comments: