Back Home Again in Indiana

Hello, all. I am in Indiana for a while, helping out before and after baby arrives. I'm busy and I don't have complete computer access, so I probably won't be able to visit much but I'll have a lot to talk about later!

I was born in Indiana, and even after we moved away, we used to spend a good portion of every summer in Indiana. There's a lot to love. I am enjoying being here again. The weather is gorgeous! People don't really appreciate it when they try to complain about the heat and I burst out laughing. But I can't help it. I can sit outside comfortably under a big shade tree on the soft grass and wave at everyone who goes by. Unlike sitting under a palm tree with the fire ants and the sandspurs, sweat pouring from every pore. Sometimes people do wave at home, though.

I am loving the fireflies at dusk. Magical! I have a wild urge to run around filling a jar with them to use as a nightlight.

I heard my first tornado warning siren today. Like a good little Hoosier, I ignored it. Later I learned they do this every Friday at noon. So as long as the tornadoes pick a different day, it's all good.

I'm also enjoying visiting with my son and daughter in law. But I've never been away from my husband more than a week before. But he'll come up after the baby comes.

And the baby is what it's all about!
Posted by Rosezilla (Tracie Walker) at 2:24 PM 8 comments:

I've been tweaking this recipe for awhile, and I think I've finally got it perfected. Taco Pasta casserole is bursting with flavor, and is very easy to make. Served with a salad, it makes a great family fun night dinner. It is also perfect for a party or potluck dish. Here's what you need to know:

DIRECTIONS
1     Preheat oven to 350 degrees
2     Bring a large pot of lightly salted water to a boil. Add pasta and cook according to package directions; drain.
3     In a large skillet, brown beef and onion over medium heat; drain. Return to skillet and add cream cheese, salt and and taco seasoning mix (NO water) and simmer for 5 minutes.
4     Pour salsa in bottom of 9x13 inch baking dish. Combine cooked, drained pasta with beef mixture and arrange on top of salsa; pour taco sauce over shells. Cover with foil and bake in preheated oven for 15 minutes.
5     Remove dish from oven and top with combined cheeses and a liberal amount of Doritoes; return dish uncovered to oven to cook for 10 minutes more.
6     Top with sour cream, if desired; serve and enjoy!
Posted by Rosezilla (Tracie Walker) at 12:38 PM 5 comments:

For those who have been interested in my husband's blog, which used to be called Neo Enunciator, he has changed the name. The link is the same as before, but the name is The Word is Truth. I am linking it here if you'd like to check it out. He has a new article up, and intends to keep up with it a bit better this time. It looks a lot nicer, too. He also has links on the side that might interest you. Feel free to stop over there and say hello. You can say I sent you!
Posted by Rosezilla (Tracie Walker) at 5:29 PM 1 comment:

Meanwhile, Our Beaches Are Still Pristine... 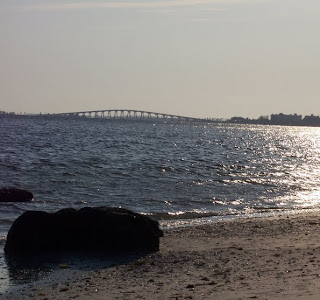 This picture shows Bunche Beach looking toward the Sanibel bridge. That big thing in front is a rock. A completely oil-free rock!

It's true, folks. The beaches in Southwest Florida are clean and pristine. White sand, blue skies, salt smell - NO OIL! NO TAR BALLS! NO BP LOAFERS - er, I mean workers. The only place in Florida that has any oil is the Panhandle. The Panhandle is light-years away from us. You guys don't travel as far to get to a different state as we do to get to the Panhandle.

The problem is, no one wants to come here, either. The economy already tanked, killing our construction business, but now the rumors of oil are killing our fishing, boating and tourism businesses. There aren't many businesses left. The tourism one, though, is actually "Death by Media." Kind of like when Dan Rather kept insisting that one of the hurricanes was headed straight for us when it wasn't anywhere near us at any time. Can't help wondering why the media is NOT attacking the current administration. Can you imagine if President Bush was still in office? I mean, first President Obama ridiculed the idea of offshore drilling. Then he announced that he was approving off-shore drilling. Immediately thereafter a disaster that makes the Exxon Valdez look like child's play, and what do we hear from the media about President Obama? What that's? You don't hear anything either? Interesting... Isn't the MAN MADE oil spill making landfall at the very same Louisiana that Hurricane Katrina went to? The Louisiana that makes its living from the waters? (I used to wonder how the verses in the Bible would happen, the ones saying that a third of the waters would be fouled and a third of the creatures living in the seas would die. That's in Revelations Chapter 8 Verses 8-11. We've seen one way it could happen!).

But, back to Florida, present-day. We are looking with concern at the oil, of course, but chances are it won't come here until it has already snaked around to the East Coast and points north.This is because of the Gulf Loop current that swooshes everything down from Louisiana around the tip of Florida and up tight against the other coast. The oil will likely follow that path as well. Unfortunately, there is so much oil that it will probably pollute everyone at some point. But we might be the last holdout in Florida where you can enjoy nice, clean, white-sand beaches. Not only that, but there are specials! Now is THE best time to come to Florida for a lovely, oil-free vacation. Put it off too long and there will likely be a lot less variety in resorts and beach front hotels. Because if business doesn't pick up soon some of them won't be able to stay up and running. All because of rumor-based hysteria. And that would be too bad, because sunset on the beach should be beautiful and not tragic. In Southwest Florida, at least, you can experience a wonderful sunset on a beautiful, clean beach. 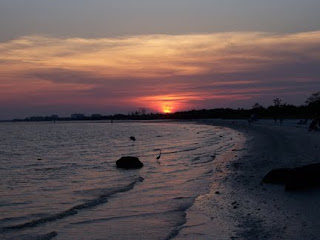 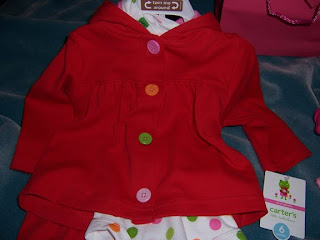 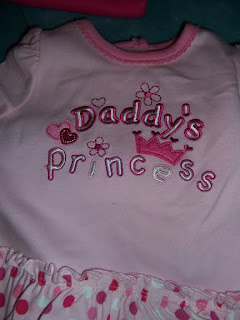 We had a fun four-day weekend! But the above darling little clothes actually have nothing to do with that. These are from a recent shopping trip extraordinaire! I am not particularly enamored with shopping. But I wanted to get something for the new little one heading our way. So when I got not one, but two $10 off coupons (one from J. C. Penney's and one from Kohl's), I decided to do a spot of shopping. As it turns out, both stores were having huge baby clothes sales! At Penney's I got the above "romper" for "Daddy's Little Princess," as well as a deep rose colored onesie and a soft bib. At Kohl's I found the darling red sweater/jacket over a polka dotted onesie, and it included a little pair of red pants with a pink flower on the back! The original prices would have made this about $45 - the sales made it more like $23 - with my two coupons, I paid roughly $3.00!!! Now that's the way to shop.

As for the weekend. Friday night hubby was able to get tickets to the dinner theater to see "Ring of Fire," the musical revue of Johnny Cash's music and life. We had seats right down front; the food was good (particularly the warm peach cobbler over vanilla ice cream), and the show was fantastic! My hands hurt the next day from clapping so much.

Saturday I spent the whole day cooking and baking for a special celebration that night. My youngest son, who spent the day playing video games with his father, turned 21 on Memorial Day. This year we celebrated on Saturday, so we avoided the unfortunate gaffe we made a different year. I don't remember which birthday it was, but we went all out and had a Pirate theme. His oldest brother took him to the movies and the middle son helped us make the front porch look like a pirate ship, put his gift in a little chest and buried it in the back yard, and wrote clues that sent him all over the yard to find it. In our enthusiasm, we even ran the Jolly Roger, procured at the flea market, up the flag pole. It wasn't until later that one of us realized it was actually Memorial Day! Oops! Anyway, this year we had a quieter dinner and party on Saturday. Sunday was nice, church and a quiet afternoon, while the son went to a party with his friends. And Monday, his real birthday, we all went to see Iron Man 2. Quite spectacular. I kind of liked Iron Man 1 better, but this one was definitely worth seeing on the big screen, and the guys liked it just as well as the first one.

I've also been exercising and losing weight (although this weekend was a bit off the reservation, what with the desserts at the dinner theater and the fried chicken and mashed potatoes and gravy and biscuits and apple pie and ice cream for the birthday party) - and oh, that reminds me, if any of you live far enough south to have a Publix, then you ought to know that for a limited time only they have brought back Tin Roof Sundae Premium Ice Cream, which is their best flavor EVER and which they inexplicably discontinued a few years back. I am also cleaning the outside of the house (and even, on occasion, the inside!), so that's what I've been up to, among a bunch of other stuff... how 'bout you guys?
Posted by Rosezilla (Tracie Walker) at 1:44 PM 5 comments: