The Mother of the Groom is Back! 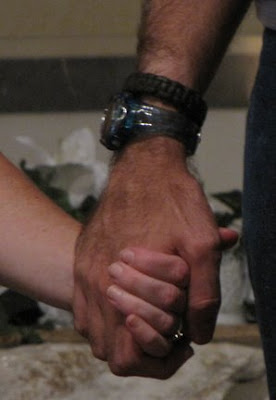 We are back from the most beautiful wedding I've ever attended. Visually, it was stunning, but I am talking about content here. There were opportunities to praise God together for blessing this young couple; the vows they wrote spoke of love being a commitment, not just an emotion; they had communion together and received a blessing on their marriage, as well as admonishment on what God expected of them according to scripture; and their care of and concern for their many guests was heart-warming.

When the cake was cut, they fed each other very gently, which I thought was sweet. (I was told that this ceremony symbolizes trusting each other and taking care of each other). 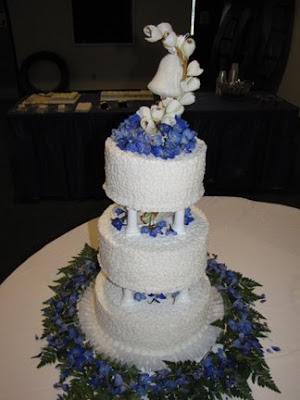 Since the groom is 6' 5" and the bride is 5' 2" the couple's first dance was a source of amusement, but it was also really sweet, and they looked tremendously happy together.

Then came the part where the mother of the groom (that would be me) dances with her baby boy. I thought I would be nervous, but once I was looking (wwwaaayyy up) in to my son's shining eyes, I forgot anyone else was in the room. I couldn't help thinking of when I used to stand him on my feet to dance, or later, when he was about 6 and loved to be a little gentleman and dance with me in the kitchen. I have to say I enjoyed this time thoroughly even if I can't dance - it just didn't matter. I got in a nice hug after, too. 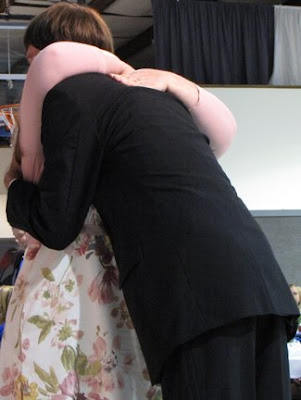 Some of the wedding party managed to sneak out and adorn the car and the honeymooners left for the Canadian Rockies. 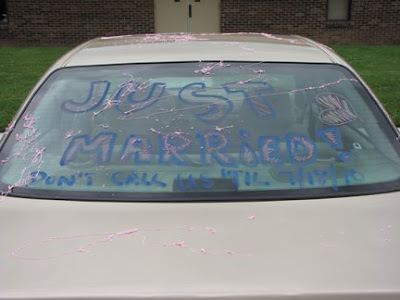 Tomorrow Is Another Day

"Our car broke down. After bumming rides everywhere for weeks, we had a mechanic come here and he put in a new starter - but the old one broke teeth off the flywheel so it's a pain to start and it cost plenty! It dies all the time.

Our plumber-friend fixed our toilet so it wouldn't leak out the bottom and now it's leaking somewhere else. He told us someone needs to take it out and shoot it. He spent all afternoon putting in new valves in the shower and tub (he had to cut a hole in the wall) and when he got it all in, it shot water out because there is a pinhole, and it has to all be taken out and returned, exchanged and put back in again. But he can't do it until Monday, then we have to take it back Tuesday and he'll replace it Tuesday night. Monday is also when my washer guy is coming, as well as when the week of Vacation Bible School begins (I teach). Also the tax job came in so hubby will have to work long hours. He had to work today, his day off, (fixing the ROOF at the shop!!!) and also get our flat tire fixed, so he came home with a headache, but then had to help the plumber all afternoon, so he had a migraine when the plumber left, and it was also too late to go to the grocery, so we can't go to church tomorrow, because no one can take a shower and we have no food. We had to call people to see if they were willing to cover for us by teaching two classes, passing out materials for Sunday School, doing the attendance stuff for all the classes, rescheduling a meeting. The fan is shooting flames out the back. The tape player ate a Bible tape and ruined the player. Our son broke the key off in the front door lock while I waited on the step with groceries. I had a nightmare, cut my finger and punctured my hand with an ice pick. To top it all off the wood in the back of my chair broke so my bottom sinks way down and my knees are even with my nose."

I was going through some things and found this journal entry from at least 20 years ago. Even though it probably didn't seem funny at the time I wrote it, it sure made me laugh when I read it today. What a bad week we were having! But everything turned out ok in the long run and we got through it. Other problems have been far more serious, devastating even, and God brought us through those as well. As a veteran camper, I really relate to the verse about God's Word being a lamp unto our feet and a light unto our path (Psalm 119:105). One time we were camping at a place that was over-run with armadillos. They are pretty cool, prehistoric looking little beasties by day, but trust me, you don't want to step on one in the dark of night. We had a little lantern, and if we held it just right, it would illuminate the spot where we were about to step. We had no idea what might be outside of that spot, but we knew that for that one step, we were not going to tread on any armadillos. So often that is how God leads us. One step at a time and no idea what else is out there, threatening or beckoning. I don't know what the future holds, but I sure know Who holds the future.

I will be out of the loop for a few weeks, what with vacation and my son's wedding and good stuff like that. But I know not everyone has things to celebrate right now, and that there is a lot of unhappiness and uneasiness. I thought I would leave you with this thought.

"And we know that God causes all things to work together for good to those who love God, to those who are called according to His purpose." Romans 8:28.
"For I know the plans I have for you," declares the Lord, "plans to prosper you and not to harm you, plans to give you hope and a future." Jer 29:11 (NIV)
"Trust in the Lord with all your heart and lean not on your own understanding. In all your ways acknowledge Him and He will direct your paths." Proverbs 3:5&6
Posted by Rosezilla (Tracie Walker) at 1:22 PM 13 comments: