I don't know if you've heard about the Grandparent Scam, because although it has been around for a while, the victims are pretty embarrassed and don't really want to talk about it. I'm not sure really why they are embarrassed, though. This scam doesn't tempt by greed; it preys on the love a grandparent has for their grandchild. My grandchild is still, as they say, "in the oven," and I would already do absolutely anything for her!

Anyway, the scam involves a frantic phone call from a young person to an elderly person; when the older person answers, the younger says "Grandpa?" and leaves them to say something like "Is this Johnny?" thus providing the name. Then the game is on. Supposedly there has been a car crash in Canada in a rental car; the beloved grandchild will go to jail if they aren't wired X amount of dollars within, say, an hour and a half; they are depending on Grandpa to save them! It's all rushed, panicked, and often Grandpa can't hear real well to boot. Plus the line gets conveniently crinkly if the grandchild is supposedly answering anything that would identify them as completely ignorant. If this ruse doesn't work fast enough, the a psuedo-lawyer comes on and really turns the screws. Oh, and they are always begged not to tell "mom and dad" because it would only worry them.

I know personally of two people who have fallen for this and I think others need to be alert. Even in the remote chance this is real, your grandchild can afford to wait until you verify the information. And trust me, chances are that it is NOT real.

So that's my Consumer Alert for the day. I have one month to "show the doctor what I can do" in the way of exercise and other health measures, before he begins monkeying with my medicine, so I'm off to the races, so to speak. I have a million things to write percolating in my head and eventually one of them will swim to the top, so I'll be back then.
Posted by Rosezilla (Tracie Walker) at 12:54 PM 5 comments:

The Nina, The Pinta and a Nephew

I have discovered that chicken pox in adulthood is nothing to sneeze at. (Hence all the Benadryl. Ha, ha). But I am slowly recovering. Meanwhile, we took our youngest son, the history buff who loves Sailing Ships, down to the Yacht Basin to tour the replicas of the Nina and the Pinta. (Some day they hope to add a Santa Maria). 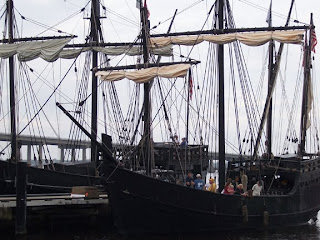 Ship builders in Brazil built the replicas with authentic hand tools. The Nina is built to size; the Pinta is a bit bigger and can be rented as a party boat. As long as you and your guests are not prone to seasickness. Like I appear to be. I could stand on the deck of the Pinta, but when I climbed aboard the smaller Nina with the slanting deck, gently rocking in the gentle surf, and looked up through the swaying sails - well, I had to get off, so I wouldn't embarrass myself. My husband and I enjoyed the tour. Our son is considering signing on as crew!

Even though I was up until 5:00 a.m., I was still able to go to church on Resurrection Day! I was forced to wear pants, which was very weird, but I was happy to be able to worship that day, of all days. In the afternoon, one of my sons brought me an Easter Lily plant. It is a beautiful plant and a thoughtful gift, which I really appreciated. 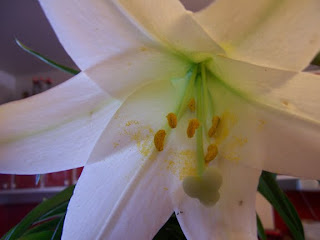 On Wednesday evening, we got a call that our 21 year old nephew had been taken to the hospital and was about to go in to surgery. He was delivering food for a Chinese restaurant and the people he delivered to,  pistol whipped him, robbed him of everything, put him in a closet and shot him, then left him there. The surgery was to remove the bullet and to put a plate in his arm, which was so shattered they couldn't piece it together again. They have not caught the perpetrators yet. My nephew is in a lot of pain. But he is alive, and for that we are rejoicing.

Two of my son's missonary friends died within a few days of each other recently. One man of heart problems; he leaves a wife and four year old daughter. A young lady, young and vibrant and seemingly in perfect health, died of eclampsia after delivering her 4th child prematurely. She leaves a husband and 5 year old twins, a 2 1/2 year old and the newborn. It has not been easy. Life is precious and precarious; Praise be to God that because of the Resurrection of His Precious Son, Jesus, we never have to grieve as those who have no hope. As He says in His Word, "Precious in the sight of the Lord is the death of His saints," (Psalms 116:15) and "For me, to live is Christ and to die is gain." (Philippians 1:21). These are good verses to remember.
Posted by Rosezilla (Tracie Walker) at 3:29 PM 4 comments: