I wanted to write about the lovely vacation we had and various things related to it. But alas, I am suffering from - well, something itchy. I woke up with a painful welt on my chin. We thought it might be a spider bite, but it spread some, and since the biggest welt-type thing was over a nick from a fingernail, I was worried it was another staph infection. It spread more -a lot more - pretty much everywhere, with itchy, oozy welts ranging in size from dime to silver dollar, and it was intensely itchy. We had done a lot of yard work, "fighting off" the overgrown jungle (err, I mean, lot) next door from eating our yard. So maybe it was poison ivy, oak or sumac. I know there were various vines, etc. where we were working. But then it spread more, only mostly in small, fluid-filled blisters. Besides serious itchiness, I also began having severe headaches and ennui, just total lack of energy. Oops, I once again thought I knew what it was.

I have kind of been proud of the fact that our whole family is evidently immune to chicken pox. Neither I nor my husband have ever had it, and none of our three sons, although I know they were exposed to it, ever contracted the chicken pox. So when my Mom thought she might have shingles, I went over to give my two cents worth. She did indeed have shingles. You can not get shingles from someone with that ailment, but you can get chicken pox from someone with shingles. And I am fairly certain that is what I've got. The doctor's nurse, going by her experience with her children, is sure that's what I have. The doc, because of the welts, leans toward poison ivy. My Mother, who feels awful about it, thinks I have both.

So I take copious amounts of Benadryl, which usually knocks me out cold. I have steeped in enough oatmeal in the form of Aveeno bath soaks to make someone a fine breakfast. I use the very strong (downright scary, if  you read the pamphlet) ointment the doc gave me a prescription for. I keep the house cold as advised. And I try sooooo haaarrrddd not to scratch.

So the posts about vacation and other, far more interesting things will have to wait a bit, until I am feeling a little less sorry for myself.
Posted by Rosezilla (Tracie Walker) at 5:52 PM 9 comments:

Donkey Basketball - A Blast From My Past 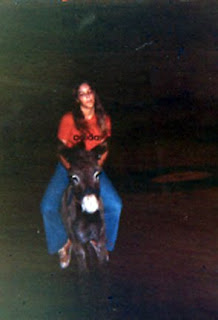 I found these pictures recently that brought back a half-forgotten memory. In the mid 1970s when I was young teen, donkey ball was a popular way to raise funds for school, church and civics organizations. I had heard of donkey baseball and thought it sounded like fun, so when I was asked to play a game of donkey basketball, I jumped at the chance. I don't remember what we were raising money for; I just showed up on the appointed day and hopped on a donkey. Tickets had been sold, though, so a merry crowd, anticipating fun, filled the school stadium we were playing in. What a wild, raucous game we played! Donkeys are notorious for their independence. When they don't want to do something, they... don't. I was spending so much time trying to coax my balky beast to go toward my basket rather than the opponents, that I didn't notice the referees encouraging and even rewarding the donkeys for unsportsmanlike conduct such as sudden stops, or bending their heads down so the rider slid off. I enjoyed riding contrary, spirited horses, so I had no trouble staying on my donkey; as for getting him to go where I wanted him to, that was a little trickier.

I admit I thought Donkey sports, which have been around since Depression days, had gone the way of the leisure suit, but I discovered that they are provided still, by small,family owned businesses that train the donkeys and truck them around to fundraisers in small towns across the USA. Despite the concerns of animal rights activists, the donkeys are firmly in charge; the referees keep an eye on things as well. Owners of the donkeys claim there have been no injuries to donkeys although a few humans have had minor injuries. Nowadays the riders have to sign waivers, take a short class, and wear helmets and pads, but still the games are played strictly for laughs. This quirky, charming bit of Americana may not be around much longer. I  could find only three companies across the U.S. that still provide these games. What about you? Any Donkey Ball in your past? Or future? 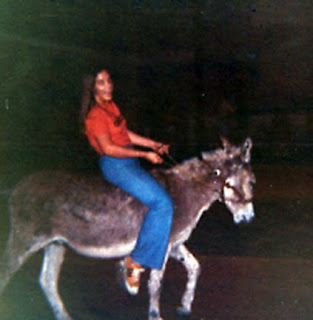 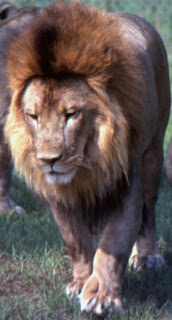 Will it go out like a lamb?
(Photo taken at Lion Country Safari in Florida)
Posted by Rosezilla (Tracie Walker) at 4:52 PM 3 comments: